Indoor Beach Volleyball (IBY) is a game played by two teams on a sand covered volleyball court surrounded by netting, where the ball is played rebound off the nets, with No outs, therefore the ball is live at all times. The ball may be hit with any part of the body above the waist (no intentional head butting), but each side is limited to three consecutive contacts. Teams can only score a point off their own serve. The game is controlled by a determined time frame per game; the team with the highest score a the end of that time is deemed the winner, if both teams finish on the same score a the end of time a draw will result.

The game is controlled by an umpire who scores and keeps the time. In any sport, there are close calls where players will disagree, but the umpire’s decision is always fmal. Any arguing with or abuse directed at an umpire can result in a point reduction, followed by a send off.

A team consists of 4 or 6 players (Depending on Competitions) In the case of mixed teams; there must not be any more than 3 males on the court for each team at one time (in 6-A-Side or 2 in 4-A-Side). Individual centres may have in house rules which apply to team structures. In mixed competitions, players must position themselves male/female consecutively on the court. Substitutions are only allowed during breaks between sets (or unless forced by injury). Rotation of players must be clockwise; no player is permitted to stay in one position. Once the ball has been served, players are free to move positions during the rally, all players must resume their positions before the next service rally.

The ball must be served within 1.5mtrs from the back right hand comer of your side of the court. The ball can be served over arm or under arm. One missed ball toss will be allowed, on second ball toss the ball must be served or a foul will be given. The ball must not have contact with any nets whilst being served. All players must serve in rotation. All players are to rotate clockwise on winning the serve, whether your team is serving or you’re the receiving team you must stand in your correct rotation. The ball must be hit (set or dug) twice on receiving the serve before returning the ball back over the centre net after this the ball can be hit straight back during the rally.

SIDE AND TOP NETS

All nets can be used in general play, except when serving the ball, or contact with the top net when it is returned over the centre net to the oppositions side of the court, this is deemed a foul.

Any contact with the centre net by a player whilst the ball is in play will result in a foul. Loose clothing or hair is not considered a net touch.

A block at the centre net is not included as part of the three hits. The blocking player is entitled to play at the ball again on the consecutive shot. Two hands must be used to constitute a block.

No player is permitted to reach over the centre net when the ball is in play. If the umpire deems a player has reached over the net during play in attack or defence, the player will be fouled.

Screening -A player or group of players, of the serving team makes a screen by raising of arms, jumping or moving sideways, during the execution of the service, or by standing grouped to hide the flight path of the ball.

If a ball is lifted or set from below the chest this is classified as a carry at the umpire’s discretion.

If a ball contacts a player twice, this is classified as a double hit (except when blocking at the net). 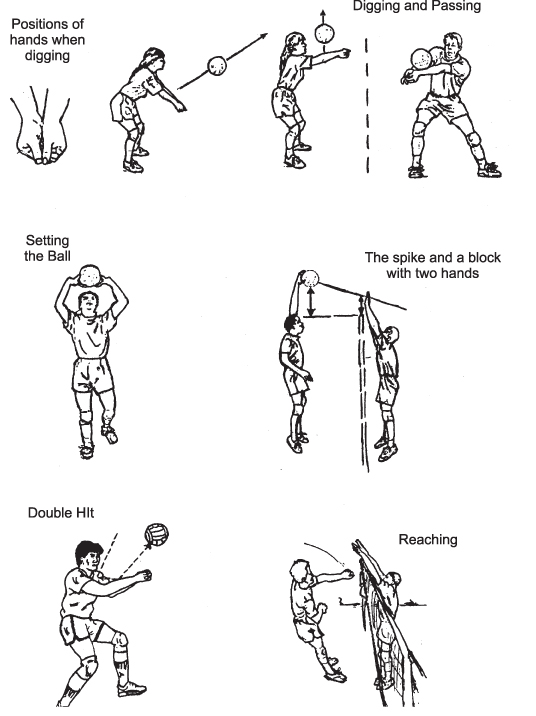